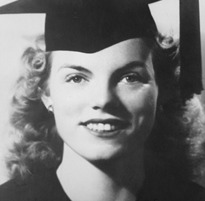 Smitten after my first introduction, our encounters provided reminders that optimism and fortitude are wonderful personality traits to have whether they are innate or learned.  I relish my time with her and always valued the stories shared that depict her deep determination, as a young immigrant girl, living a charmed life; she continues to impress me with her resilience to aging and pessimistic people.

She was born February 27, 1925.  The first in her family to be born in a hospital, Madaline remembers little from her first five years in Edewecht, Germany.  Her constant companion was her mother, who was a prominent figure throughout Madeline’s life.  They were never separated, until the death of her mother at the age of 100 in 1994. It has been said that, “Travel and change
of place impart new vigor to the mind.”  This statement reflects the challenge she and her family encountered, when due to the political unrest and depression, they left Germany in 1930.  They hoped for an improved life, enduring an 18 day trip on the ship named “Bremen” crossing the Atlantic Ocean and arriving in Ellis Island.  Then taking a train with lapels pinned to their clothes indicating their destination they found their way to an uncle’s farm in Los Altos, California. After arriving here in America, at the age of five, she lost her father.  He died suddenly of a heart attack hastened by World War I gas poisoning at the premature age of 32.  This left them alone with minimal possessions and a language barrier - but her mother’s talent to make the best deep fried chicken and syrup cookies afforded them an opportunity that would change their lives.

This is where the story and generosity of the human spirit continues to astound….Her mother, Wilhelmina had attended cooking school in Germany for six months as a young adult.  Farmers
often sent their girls away to learn this skill; they would return home and take on culinary duties for the family.  “She was a superior cook and baker, her angel food cake and cheesecake were decadent, people were always in awe of mother’s talents in the kitchen” Madaline beams with a twinkle in her eye.  Once here in California, a brief stint at a local lunch room; Wilhelmina once again impressed a prominent business man and began working as the family’s personal chef.  He lived on a beautiful 120 acre estate in the bay area, was a gracious man and treated Madaline as his own daughter.  “Lavish costume parties, clothes and jewelry were normal extravagances, but he felt strongly about my education and always tested me on my spelling and treated us with appreciation and respect,” Madaline quips. With this new life and all these material objects, she never forgot where she came from. The German leather doll with porcelain head and arms given
by her father was a cherished reminder.

Life was wonderful, which allowed her to dream for higher aspirations.  While in grammar school as a young adult, she had vivid images of her own desire and dreams. As if were to be fact, three sequential goals that she would verbalize to many: to attend Stanford University, to meet a tall handsome man, who would love and care for her and lastly, go to Hawaii.  Madaline accomplished
all three, in sequence, providing an example for many on how this young woman had a fortitude that many marvel.

After high school, she attended a secretarial school for a few months while attending San Jose State. “I needed to muster up the courage to take the Stanford entrance examination.  “Fear has a way of precluding us from our goals if we allow it” she verbalizes.  While I flip through a neatly organized photo album and notice a radiant woman with an empowered quality about her, she motions gracefully “That is my graduation picture from Stanford, class of 1947.  They only allowed thirty females because it was war time.”  She graduated with a degree in art and pre- architecture.

A woman who radiates such charm and courage is bound to attract a man of equal strength.  A
dashing gentleman swept her off her feet, the moment he entered the realty company she was working at after graduation. Bob walked in with a swagger attempting to drum up commerce and
connections for the title company he was working at; little did he know his intention was future romantic business.  Together they created a wave of 53 wondrous years together.  She was madly in love with him.  “His gentleness and kind spirit stole my heart” she often would tell me.  The two
of them took pleasure in parenthood together, raising their only son, travelling to various places with Bob’s work, or socializing with the multitude of acquaintances they accumulated over the years.  “Bob understood that marrying me was a package deal, he never questioned it or made me feel guilty having my mother live with us. I am a very blessed woman.”  It was a difficult transition for Madaline when the love of her life passed in 2003.  “I had to learn many things and take on many roles that I had never experienced before.”  Her usual solid foundation had shifted, a best friend, confidant and comrade was gone, but her admiration for Bob never waned.  She took on this new normal with that genuine smile and made the best of it.

Her hobbies and civic duties make her a dynamic woman in our community.  If she wasn’t baking tasty sweets for family, friends, auctions and clubs she belonged to, she was arranging fabulous floral arrangements at the local hospital and greeting visitors at the reception desk.    She participated in the Stephen Ministry program at her church realizing that many people need support to promote hope and healing back in their lives, this was something that she could offer – again, sprinkling her optimism and courage to them.

A noteworthy gardener, each rose in her backyard is stunning and artfully pruned.  African violets may be seen flourishing along the windowsill in her office and potted orchids dancing with fervor on her kitchen table. She will be leaving our area shortly to reside in Oregon with her only son and his family.  A look of delight was often seen when she would speak about her two grandchildren and her great grandchildren.  Tucked in her handbag was always a brag book loaded with recent pictures of her family, as a proud grandmother and great grandmother taking pleasure in presenting the beautiful blossoms of her family tree.

Madaline exudes what it means when “life loves the liver of it.” As we go on in our action packed
lives, let’s take a moment and smile at someone you do not know, it will make their day and you will be rewarded. Let’s all remember to live life with an eternal optimism, Madaline Statton style.
Welcome change in our lives, treat others with compassion, and dig deep and exercise your courage to make your dreams come true and yes - she did get to Hawaii, multiple times with the tall handsome man she adored.

Madaline Statton has the natural ability to sprinkle sunshine on the many individuals she has touched in her 89 years of living.