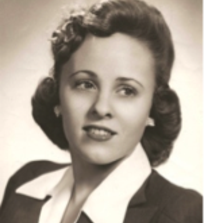 Aleene came charging into this world on January 20, 1924, and spent most of her youth in Los Angeles.  Her father and paternal grandfather modeled the concept you can do anything which was very influential on this young girl.  A life lesson she learned early on from her father was, “Always remember you are responsible for your choices.”  The importance of choosing wisely resonated with her.

Aleene was an only child and given the liberty to be adventurous.  She took full advantage of this opportunity.  Her adolescent years created the foundation for what was yet to come.  At the age of nine, this bold young girl would walk to the Ambassador Hotel and begin her dance of discoveries.  For those of you who are unaware, this hotel, which was built in 1921, is a landmark destination.  This impressive hotel was home of the famous Hollywood oasis, The Cocoanut Grove nightclub as well as a popular location for the Academy Awards.  It was also the sobering site where Robert F. Kennedy was assassinated.  It was here Aleene would wander through the lobby absorbing the splendor of the hotel’s majestic wonder, regularly watch the people check-in and out, and admire the stunning floral arrangements. Perhaps, inspired by the marvelous flowers displayed throughout the hotel, she started to tap into her pre-existing entrepreneurial spirit.  She began gathering flora from around her apartment building and making handheld bouquets to sell on the street.  She was successful; her friends were particularly delighted with her earnings, as she would treat them to the movies.

Work ethic was instilled into her at an early age. Her father managed restaurants and often Aleene would work there with her mother.  School, however, was never something that Aleene enjoyed. She wanted to be challenged and those four walls did not provide enough intellectual stimulation.  “School was boring to me,” she quipped. She managed to plod through grammar and high school entertaining herself by forming social clubs, sneaking away to bond with the four legged beauties at a nearby stable, and finally, meeting her future husband, Frederick Hershman aka “Woody”.  He was quiet, but Aleene’s radiance and rather lengthy cerebral conversations on their walks home from LA High, would win his heart.  They married in Los Angeles at the Chapel within Forest Lawn Memorial Park.  Years later she would revisit Forest Lawn again, but for a different, ambitious reason. She asked the florist if she could watch him assemble the floral arrangements.  She wanted to learn his craft.  It is here the pay it forward story continues.  He offered her a job and the remainder of this living legend’s story will astound you.

At the age of nineteen, Aleene opened her first business named Arcadia Florist.   One year later she renamed it Aleene’s of Arcadia Florist.  Her husband went off to serve in WWII as an instrument technician and she began teaching a class on how to make corsages.  While still learning about flower arranging, and knowing little about running a business, she kept moving forward.  Her embedded, tenacious drive and willingness to expand her knowledge base led her to a new product called wood fibre, which was just being introduced in the United States.  Grown only in the South Pacific, in its natural form it resembles a bamboo stalk and must be harvested with a machete.  Once manufactured the material mimics’ rice paper and was used to imitate fresh flowers.  When the wood fibre was dyed and scents were added, people found it difficult to notice the difference between the fresh and fake flowers.  It was at this point, Aleene began packaging her “make your own corsage kits”, which became an instant success. Always embracing her out of the box thinking, she would allow customers to bring in their own flowers to make their personalized arrangements.  This was unheard of and others in the industry were not pleased with such visionary thinking.

Aleene struggled to find glue that would not soak through the materials she was using; often it was wood fibre, silk, satin or velvet.  She located a chemist and worked with him to formulate that familiar gold bottle found in almost every crafty household in America - Aleene’s Tacky Glue. It is now used for every imaginable purpose and considered the gold standard of all adhesives on the market.  You may have a bottle in your house right now.

Somewhere in the middle of this exciting adventure, she and Woody had five remarkable children together: Candace, Fred, Heidi, Tiffany and Tony.  In 1947, Aleene closed her florist shop and moved her flower making classes to her home in order to care for her first born. As her business grew quickly, so did her family.  She arranged for a housekeeper who would also assist with her young children.  The housekeeper remained with the family for 18 years, helping to care for the five kids while Aleene focused her days on the fast growing business. Aleene, however, was also very comfortable bringing her offspring into the workplace with her. From the time they were very young, they were expected to work both the retail and wholesale business.

Aleene Jackson gradually became an icon.  Her determination and promotional skills led to regular local TV segments in the late 1940s, when TV was in its infancy.  In January 1953, she was featured in Life Magazine, an impressive feat.  As her popularity grew, she continued to make television appearances on top national daytime talk shows.  She recalls her first appearance on the Dinah Shore Show where alongside Aleene was another first-time guest, Burt Reynolds.  In the late 1960s, artificial flowers were becoming fashionable, and Aleene was a leader in the industry making her presence known in thirty-five states.  She came up with the brilliant idea of taking her crafting business on the road with a “Craft Caravan Tour.”  Joined by two colleagues, for six months she appeared on television teaching and marketing her goods and services.  Aleene identified an opportunity to sell her product and publicize the craft industry by encouraging people to open craft stores.  It is unfortunate that many do not remember the history of the crafting industry.  This is why it is so important to celebrate the genius of this young girl who grew into her well-deserved title: “founding mother of the craft industry.”

It has been said that it is not that we have a short time to live, but that we waste a lot of it. Aleene was never careless with her time.  She fine-tuned her productivity with her own methodology, which created a formula for success.  There was never talk of balance or multi-tasking, just an unconscious ability to put her unique talents to practice.  She was an entrepreneur with a family business; there was no squandering of time articulates her daughter Tiffany.  Having this innate insight gave her the opportunity to keep her kids with her more so than a typical working mom.  The now tired adage “time is money” was treated as a useful lesson that allowed Aleene the opportunity to build a life that was full and rewarding.

Still at the age of 90, this courageous businesswoman has influence over many people, decisions, and projects.  This is an impressive accomplishment considering in a lifetime we can either effect change or have change affect us.  Aleene clearly defines what it means to be an agent of change and continues to inspire those around her to do the same.  It is clear she also has a gift for guidance.  Currently, she is working with her daughter Tiffany to incorporate an art studio in the town of Piru, a quiet close-knit community located in Ventura County.  It is here she will be able to sit back in her floral comfy chair and tell her story to the many archivists and reporters who are wise enough to understand the depths of her journey.

From generation to generation, history and its lessons often get misplaced.  We only know what we have seen and experienced in our lifetimes.  Let’s honor and remember this pioneer that carved a path for countless others with her determination and purpose.  She led innovation.  She disregarded naysayers who discounted her dreams and paid attention to her own intuition and instinct.  The wind of the world can blow us many places, it is up to us to define our direction and decide where we want to land. This worthwhile wisdom applies to all facets of our lives, whether it is family, marriage, work or school related.  I leave you with a quote from our living legacy, “It doesn’t happen overnight, people need to understand that instant gratification can be harmful to the creative spirit.  To build something longstanding, one needs to take the worthwhile steps of investment to include time, energy and mistakes."